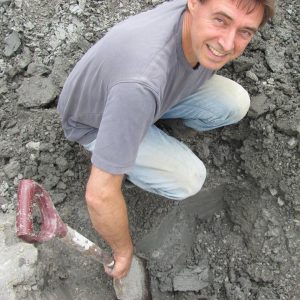 Mark has been interested in fossils for as long as he can remember. He started collecting fossils in the chalk near his home in Cambridge when he was about 10 years old. Mark has collected extensively around the country and has contributed many specimens to museums including a four metre Ichthyosaurus that went to Bristol Museum. He has also found the remains of Mammoth and other Pleistocene mammals such as the Saber-Tooth Cat. His main interest is ammonites and he has contributed to the ammonites chapter of a book published by the Palaeontological Association called ‘Fossils of the Gault Clay’.