Near Cirencester in central England the river Thames is barely a few metres wide as it meanders on its way eastward through the Wiltshire countryside. Yet 230,000 years ago the river was much broader than it is today with many sub-channels and streams criss-crossing a main channel (see image right). 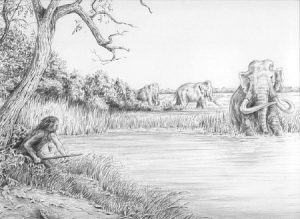 Beyond the reed banks at its edges would have stretched temperate woodland and grassland as the land and its inhabitants enjoyed a warm period between two Ice Ages known as the Hoxnian Interglacial. Moving through this landscape would have been herds of Mammoth, Deer, Horse and primitive forms of cattle such as the Auroch. These herbivores would have been on their guard for predators such as lions, wolves and wolverines. There was also man – archaic humans known as Homo heidelbergensis who were skilled hunters. At some places along the river were fordable areas where crossing was easier. These crossings were sometimes dangerous places, particularly during floods where animals could be swept away and drowned. They were bottlenecks, where predators and prey often came into contact with one another. The possibility that early man exploited these crossings as an easy means to obtain food became more than just conjecture when in 1998 Neville found evidence of prehistoric man and mammoth in close proximity. When exploring a gravel pit close to the present course of the river he suddenly came across broken mammoth bones and the flint tools of early humans in a clay channel 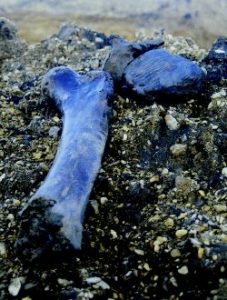 (the image left shows a freshly dug mammoth leg bone and tooth). The spectacular finds that followed and the possibility that early man may have been one of these predators patrolling the banks of the ancient Thames make an interesting story. In October 2002 a film crew making a new palaeontological television series called the ‘Big Monster Dig’ for Channel 4 visited the site to try and solve the mystery of early man and the mammoths. This programme has subsequently been screened on satellite television.

When Neville found the bone rich channel of clay and gravel he had a hunch he was on to something big. Over the next few months the gravel pit grew in size as commercial digging continued and more of the bone channel became exposed. Mark joined Neville and together they searched for more fossils. Meanwhile, the quarry’s screening machines nearby kept getting clogged with mammoth bones! It soon became apparent that the bone bearing channel lay in what would have been hollows in the old river bed. It was clearly at the base of the younger Thames river gravels which were being extracted by company working the quarry. Most of the gravels found in the area were known to have been deposited in cold stage conditions during the last Ice Age. Was this bone rich channel of the same age? To answer this question ice gravel experts from Cheltenham College visited the site and found evidence that the bone channel was much older than most of the gravel deposits of the Thames Valley floor. The mammoth bones and data from pollen and mollusc remains suggested a time of warm, almost Mediterranean, climate. This was an exciting discovery and suddenly there was an urgency to excavate the channel before the gravel company closed operations in the quarry. A grant was obtained from the Natural Environment Research Council to excavate the channel. Experts from the Quartenary Research Unit at Oxford University became involved as well as paleontologists from other institutions (the image right 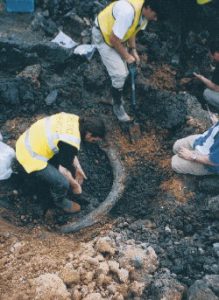 shows the excavations revealing a mammoth tusk). It was soon realised that the mammoth remains weren’t the usual steppe mammoths of Siberia but were smaller (up to 3 metres high at the shoulder), lighter boned, faster moving creatures and they were very old! Mammoth expert Adrian Lister from University College London agreed, concluding that the site belonged to a warmer period and that the finds were approximately 230,000 years old. In contrast most of the gravels that are commercially extracted from the Thames Valley are only about 50,000 years old Adrian identified the mammoth remains as belonging to ‘Mammuthus trognotherii’. These animals lived before the woolly mammoth and had never before been found before in this part of Britain. From the number of tusks, teeth and bone that started to emerge, including many from younger mammoths, it soon became apparent that the remains were most likely of a herd that had got into difficulty, maybe after a flash flood. Neville suggests that when the herd came to a crossing point, one of the younger mammoths got swept downstream. Mammoth almost certainly had the same parental instincts characteristic of modern day elephants and he considers it very likely that the rest of the herd would have gone to the rescue of the one in difficulty. They too would have been swept away and drowned. The carcasses were probably swept up against a bank and would have soon attracted scavengers. Early man would have spotted the signs of their demise from some distance. Circling birds, the cries of hyena, not to mention the smell of decaying flesh would have acted like a beacon to them. These early hunter gatherers were most likely Homo heidelbergenis but could have been early forms of Neanderthal. They would have attacked the carcasses with flint hand axes. The image below shows a hand axe found by Mark at the site. This axe displays a typical tear-drop shape which is representative of the Acheulian culture. No hominid bones have been found at the site, but over twenty hand axes have been recovered. The most likely scenario is that these fortunate hunter gatherers pitched up camp and had a meat feast! The manner in which the bones were found, packed into a layer one metre thick, and all disjointed, suggests dismembering and a meat feast that happened just the once. That early man was responsible, there can be little doubt. When some of the bones were analysed by archaeological experts from Reading University and paleo-forensic techniques applied to them, cut marks were found! Unfortunately, because the bones were jumbled, it makes it very hard to establish how many mammoths there were. There may have been only 50, or there again, there could have been as many as 200! 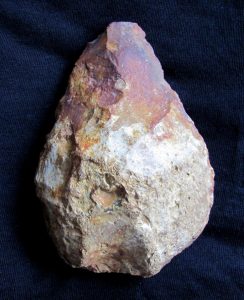 In October 2002 a film crew filming for Channel 4 television visited a gravel pit adjacent to the original dig site in order to investigate this theory of early man and the Thames mammoth. By 2002 the original dig site had flooded but Neville and Mark obliged the film crew by donning their diving gear and retrieving more mammoth bones (see collecting grounds).