The Gault clay is one of the most fossiliferous horizons in Britain. It was laid down approximately 120 million years ago during the Albian stage of the Lower Cretaceous period. Geologist’s split the Gault clay into the Lower and Upper Gault. The Lower Gault is a dark, fossiliferous, blue-grey clay that was deposited during the Middle Albian. It is famous for its abundance of well preserved fossils that include bivalves, brachiopods, gastropods, cephalopods, echinoids, crustaceans, fish teeth and bones and reptile remains. The thickest deposits of Lower Gault clay outcrop in Sussex in South-East England where almost the entire sequence has been exposed in a clay pit near the small village of Small Dole. This pit was formerly dug to make cement but is now a landfill site. 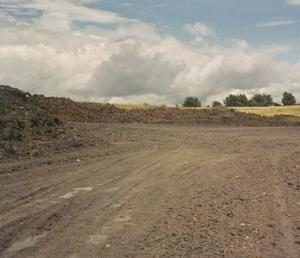 The photograph (right) shows the pit in 1993 when beds of the spathi Subzone were exposed revealing exquisitely preserved ammonites of the Hoplitidae family.

The site had produced remarkably well preserved fossils for many years. Visitors to the site would find many ammonite body chambers scattered across the floor of the pit. Examination of the stiff, dark clays would reveal beautiful irridescent impressions of ammonites and other fossils, particularly the bivalve Inoceramus. The best preserved fossils, however, were found within mudstone concretions that only outcropped at certain horizons. The most exquisite ammonite specimens came from within or close to the concretionary layers in the lower part of the spathi Subzone, designated as Divisions 3(ii) and 3(iv) by Owen in his ‘Middle Albian Stratigraphy in the Anglo-Paris Basin’ (1971). These Divisions were revealed between 1992 to 1994 when a series of cells were dug along the northern side of the pit for the disposal of domestic waste. The 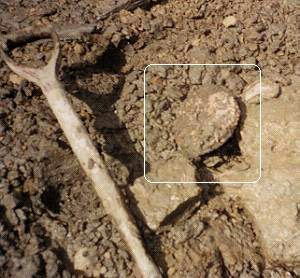 photograph (left) shows fragments of a typical concretion next to a spade handle for scale. The white box surrounds an ammonite identified as Hoplites dentatus that measured approximately 6″ (15 cm) across. It was found on the topside of the concretion. The presence of the concretionary layers can be explained by the cyclic nature of the deposition in these Lower Cretaceous seas. The fine clays were formed in periods of relatively rapid sedimentation whilst the concretions formed when deposition was partly arrested. The clays are highly feruginous in nature such that the clay-ironstone concretions often weather red when exposed to the elements. The ammonites in these concretions often have white aragonitic shells such that they strongly contrast against the reddish matrix. Some ammonites were found loose in the clays close to the concretionary layers. Many of these had pale pink irridescent shells that scintillated rainbow colours. When the shell was removed their internal chambers were found to be infilled with calcite crystal, whose colour ranged from yellow and amber to deep brown. Some of the larger ammonites (particularly the spiny Hoplites maritimus) exceeded 9″ (23 cm) in diameter. At one horizon, lenticular mudstone concretions were common and were found to contain clusters of ammonites, though many had crushed body chambers. Over the period 1992 to 1994 we collected several hundred Hoplitid ammonite specimens that included the zonal ammonite Hoplites dentatus, the rotund Hoplites paronaiand the spiny Hoplites maritimus. The final cell along the north side of the pit was completed in 1994. Whilst the other cells were filled with waste this final cell was left for several months. The photograph (right) 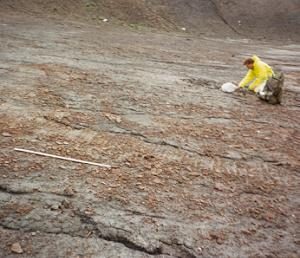 shows the cell floor after considerable weathering. Note the reddish brown fragments from a band of ironstone concretions in the foreground and channels in the clay caused by rain water. Countless smaller fossils were washed out during this period. These included small irridescent Hoplitids and heteromorph ammonites, gastropods, solitary corals, belemnites, bivalves, fish and shark teeth and crustaceans. The rule in the foreground measures 1 metre. Shortly after this photograph was taken the cell became inaccessible. The fossiliferous beds of Divisions 3(ii) and 3(iv) are now no longer exposed. Subsequent cells were dug to the south but as the Gault clay dips in this direction, the new exposures were in much higher beds where fossils were less well preserved. The site is now finished and most of the cells are filled with waste. One small corner of the pit has been left as a ‘Site of Special Scientific Interest’ (SSSI) but little if anything is to be found there.

The following photographs show some of the ammonites that were collected during the 1992 to 1994 period. From left to right they are: Hoplites paronai, Hoplites vectensis, Hoplites dentatus, Hoplites maritimus.