Nev and the Fossil Mammoth Skull:

This is only the second mammoth skull to have been found complete in the United Kingdom. It was found recently by Neville and Mark in a Cotswolds Gravel Pit. 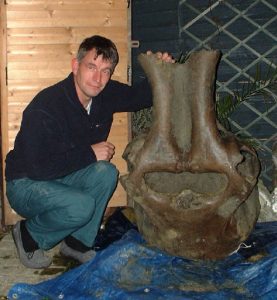 Neville spotted the tip of the skull protruding from a gravel bank. At first it looked like the remains of a lower jaw but after three hours of digging it became apparent that a whole skull had been found! The immense size of the skull is apparent in the image (top left). 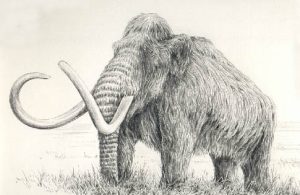 The fossil skull belonged to a female mammoth that was 25 – 45 years old. It is estimated to be at least 50,000 yeas old. The exact species is still to be determined but it is believed to be a Woolly Mammoth (see illustration bottom left).