This page presents a fossil locality in the Kellaways Formation. 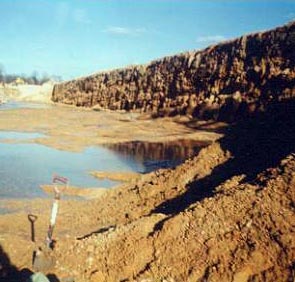 The site (pictured right) is one of several Kellaways exposures in Southern England and is a rich hunting ground for ammonite fossils. The Kellaways Formation (named after the Wiltshire village of Kellaways) consists of marine clays and sandstone deposits of Lower Callovian (Mid-Jurassic) age. These deposits are approximately 165 million years old! The site featured has Kellaways clays outcropping beneath several metres of Pleistocene gravels (visible within the quarry face on the right of the picture). Mammoth remains such as teeth, bone and fragments of tusk have been recovered from these gravels. Within the clays in the floor of the quarry are large mudstone concretions. It is within these Jurassic tombs of stone that one can occasionally find beautifully preserved ammonites.

The following photographs show in sequence the outcome of a typical collecting trip. On this particular day, and indeed on most days, the collecting ground lies underwater. The floor of the quarry is a lake of liquid mud that can totally spoil your afternoon if you stand in the wrong place! The lake of mud is clearly visible within the next picture (left). 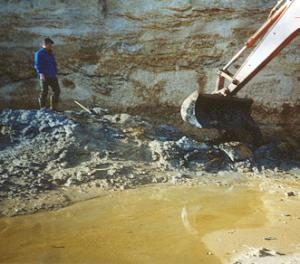 Here Neville stands on an ‘island’ of Kellaways clay as an excavator assists in the removal of several large (and fossiliferous) mudstone concretions. These concretions have shelly undersides that are rich in brachiopod and bivalve fossils. They vary in size, but typically can measure 1.5 metres across and 30 cm deep which makes their removal and manipulation extremely difficult. Generally we turn them on one side and then cleave them using a chisel and sledge hammer. If all goes according to plan the concretion will open like a book enabling the fossils inside to ‘see’ daylight for the first time in 165 million years! Approximately one in three will contain a large Kepplerites ammonite (12 cm diameter) preserved in yellow and brown calcite with a white aragonite shell. Occasionally clusters of Kepplerites will be found nestled together. The concretions also yield the round robust ammonite known as ‘Cadoceras’ and the slim serpenticone ammonite ‘Proplanulites’. Fossilised wood is common and is indicative of the close proximity of the mainland in those times.

The Kepplerites ammonites within these concretions are known as Kepplerites galilaeii. This is the index fossil for this horizon.  Close by within a higher shelly layer it is possible to find specimens of Sigaloceras calloviense which marks the highest (or youngest) zone in the Kellaways Formation. The picture 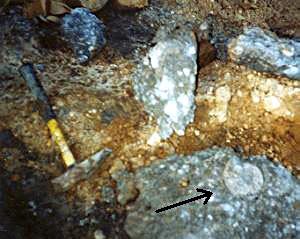 on the right shows the remains of one large shelly concretion after it had been reduced in size. The arrow indicates a specimen of Kepplerites galilaeii and a ‘two pound’ geological hammer is shown for scale. The white ‘speckles’ on the concretion are brachiopod fossils.

The final picture on this page shows a close-up of a Cadoceras ammonite found on the same day. 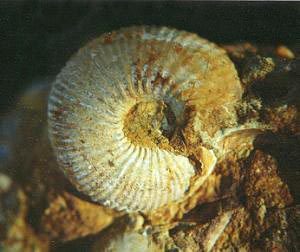 When it is finally prepared in the workshop, it will be left in its surrounding matrix, which also contains a large piece of fossil wood. The ammonite measures 5 cm across.